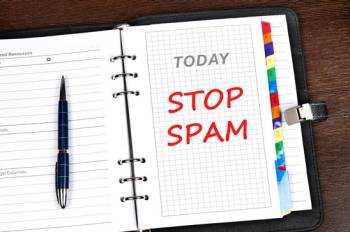 One of my clients contacted me because the website I built her has recently been overwhelmed with spam comments. While this isn’t entirely a bad problem to have, as it indicates that your site is getting found, it’s certainly annoying and time-consuming until you find an effective way of blocking spam.

I just sorted out two “real” comments from 274 spam ones on this site, too.

When I checked to see why the anti-spam plugin I’d installed, (Spam Free WordPress by Todd Lahman) wasn’t working for spam-blocking, I found out that the author had essentially disabled the functionality of his free plugin. He now has a paid version, and this seems to be the motivation for his feeling that he has “no obligation to support” the free version. Note that the free version, which previously worked, no longer works even if you fail to update it, since the plugin required registration which has been removed. Even if you’d donated to the plugin creator, as I had… the plugin no longer works.

-smilieman, a commentor on WordPress.org

Since I’d installed this plugin in a large number of client sites, they were immediately getting lots of spam. That’s the downside of building sites that rank well, if you don’t have a good anti-spam plugin, and suddenly and without warning, they didn’t.

Which leads to today’s story…

I don’t know where I first heard this story, but it’s always resonated with me as a cautionary tale about human nature.

Imagine that I come to you on Friday, around noon, and I hand you $1000 in cash. When you ask why, I tell you it’s for you, and to enjoy it, but I give no further explanation. Then I leave.

And this goes on for months. In fact, for over six months, more than 25 Fridays, I show up like clockwork and hand you $1000 each Friday.

And then, one Friday, I fail to show up.

I’m pretty certain that most people (and certainly most I’ve told the story to), react at least initially with “Where’s my $1000!?” Their initial reaction isn’t “Wow, that was pretty cool, I sure enjoyed the extra cash.”

And their emotion, as they realize the $1000 isn’t showing up, isn’t (initially anyhow) gratitude. In fact, disgruntlement, disappointment, even anger are far more likely.

Even though they never had any “right” to the money, never earned it or had it promised to them in any way, the consistency of the gifts created an expectation, and the disappointment of that expectation usually results in some form of hostility, although it may be transitory in some people.

And This is Why It’s a Cautionary Tale

If you’re a business owner, be aware that any service or item you provide for free to either customers or staff will be difficult to ever withdraw. You can get around this with a clearly-stated time-limited offer (sometimes), but in general, withdrawing a benefit that was previously free will bring a hostile and often vocal reaction.

Is this “fair”? I mean, you gave something freely that you had no obligation to give, and surely you have the right to stop any time? Well, fairness doesn’t come into it, I’m afraid. Don’t count on the majority of your customers or staff being rational enough to say “Hey, that was great that “x” used to be free for so long.” That’s not the reaction you’re going to meet up with, most often.

So What About Blocking Spam?

Incidentally, I’ve installed another free plugin for my client, called Anti-Spam. Hopefully this one works as well as Spam Free WordPress used to. I’ve also added it to this site and so far it seems to be doing the job.

Edit: Anti-Spam by Webvitaly continues to do a good job of blocking spam on this site, so I’ve started installing it on client sites too.

Posted on September 6, 2013 by Karilee in Small Business Marketing