If you have a local, “bricks and mortar” retail business, you may occasionally curse the competition the web has brought – but Facebook Deals can actually help you bring in more traffic, more new clients to your shop, restaurant, or entertainment venue. And it’s free, for now.

As Facebook Director of Local Products Emily White explains in the video, the concept is simple. You can check your iPhone or Android mobile phone, and see a list of nearby retailers, restaurants, or entertainment venues. If a retailer is offering a Deal, you’ll see a yellow square, and can check out that deal instantly. You might find out that your favorite coffee shop is offering a free muffin with the purchase of a coffee, or that an item you’ve been thinking of purchasing is discounted.

Facebook Deals are being rolled out country by country, city by city. Logging on here in Canada, I see a notice that “Deals will be available soon in Atlanta, Austin, Dallas, San Diego and San Francisco.”

To see if Deals (and Places) is presently active in your country, Check out the Facebook Deals page.

From the Facebook site: “There are 4 types of Deals: individual, friend, loyalty and charity. Deals and donations are offered by individual businesses, not Facebook, and may be available in limited quantities. Friend deals require tagging a number of friends to share savings. Loyalty deals require multiple check-ins, similar to a traditional punch card.”

What’s in it for Facebook? It brings you to Facebook Places (on their site), perhaps for the first time. It encourages you to return regularly. They’re trying to boost your user experience and become your application of choice for “Local”, GPS-enabled information. Of course, they may monetize the service in the future, but for now you can promote your business, at no cost, on Facebook Places. Check out “New, Find Local Deals” on Facebook to learn how. You’ll see that you can subscribe to get Facebook Deals updates on that page.

I would expect that the “free” price also has a lot to do with local discount deals sites like Groupon, Livingsocial and their many competitors. Facebook’s a bit late to this arena, so they are smart to avoid attempts to monetize it, at least for now. Their interest probably became intense in the fall of 2010, when arch-rival Google was negotiating to buy Groupon for a rumored six billion. The deal didn’t happen, apparently refused by Groupon, which is preparing to go public this year instead.

Google has since begun development on its own group discount service, Google Offers. If you have a Google Places listing (and you should if you have a retail business!), log in give Google Offers a try – it’s free, and you don’t need to talk to a salesperson as you would with Facebook Deals. See the example screen below. 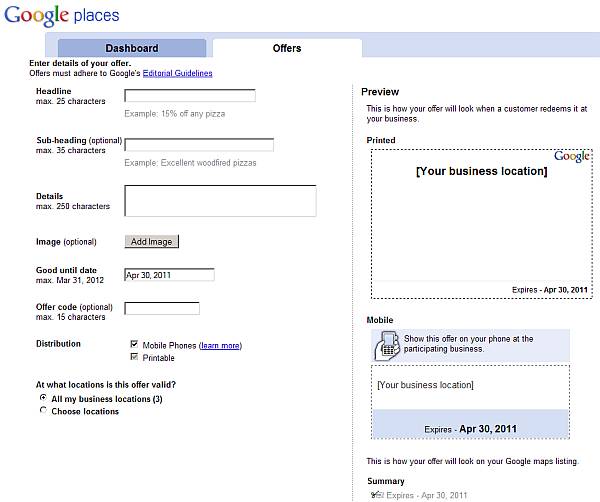 Would You Turn Down Free Advertising?

Whether you try out Facebook Deals or Google Offers, it would be smart to give at least one of these relatively-new services a whirl. Just be sure you that whatever you offer, you can supply it happily to whoever shows up looking for it. If your deal is too sweet and it costs you too much, or it attracts more new customers than you can serve well, you’re doing negative marketing…

Facebook Deals and Google Offers can attract new business to your store, restaurant, or entertainment venue when used well.

Posted on March 27, 2011 by Karilee in Small Business Marketing